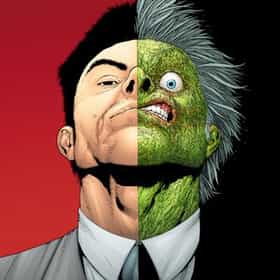 Harvey "Two-Face" Dent is a fictional supervillain that appears in comic books published by DC Comics, and is an enemy of Batman. The character first appeared in Detective Comics #66, and was created by Bob Kane and Bill Finger. Harvey Dent was once a clean-cut district attorney of Gotham City and an ally of Batman. However, he goes insane after mob boss Sal Maroni throws acid at him during a trial, hideously scarring the left side of his face. He adopts the "Two-Face" persona and becomes a criminal, choosing to bring about good or evil based upon the outcome of a coin flip. Originally, Two-Face was one of many gimmick-focused comic book villains, plotting crimes ... more on Wikipedia

Harvey Dent is ranked on...

#61 of 961 People who voted for Harvey Dent... People under 30 are 2x more likely to vote for this also upvote Dark Knight Franchise on The Best Superhero Movies Ever Made The Greatest Movie Villains of All Time 1.2M VOTES While some of us tend to despise movie villains, plenty of movie-goers favor some of these antagonists. Whether that's ...
#7 of 89 The Best Batman Villains Ever 143.1k VOTES Batman has, arguably, the greatest rogues gallery in all of comics, so let's rank every Batman villain best to worst! Bad gu...
#612 of 3,828 The Best Movie Characters of All Time 1M VOTES List of the best movie characters of all time, ranked by film buffs and people like you. This list includes performances by ...
#10 of 652 The Best Comic Book Villains 272.2k VOTES Who are the best comic book villains of all time? This list of top supervillains in comics includes some of the most notorio...
#28 of 93 Fictional Lawyers You'd Most Want Defending You 9.8k VOTES A list of fictional lawyers you’d most want defending you. Do you know of a movie with a great lawyer in it? Do you wish som...
#45 of 58 The Best Villains the Teen Titans Have Ever Faced 5.5k VOTES We all love Teen Titans, but who are the best Teen Titans villains of all time? The Teen Titans are a group of young, teenag...
#7 of 97 The Best Characters from Batman Comics 119.7k VOTES The DC Universe has some great characters in it, but perhaps Gotham City has some of the best. Being non-superpowered, Batma...
#5 of 17 17 Characters Who Broke Bad (Other Than Walter White) 1.3k VOTES Change is one of the few commonalities virtually all good fictional characters share. The journey of how they change is...
#14 of 24 The 25 Hottest Batman Villains Ever 9.6k VOTES DC Comics has perfected the craft of creating intriguing female villains, arguably because their outlaws are often easy on t...
#21 of 64 The Best Blonde Villains in Entertainment History 30.8k VOTES List of blonde villains in film, TV, comics, cartoons, and reality TV, ranked according to their capacities for pure evil. W...
#10 of 25 Cartoon Politicians on TV You'd Actually Vote For 35.2k VOTES With the political climate at an all-time high, sometimes it's best to escape the real world by kicking back and watching so...
#13 of 29 The Best '90s Superhero Cartoon Voice Over Actors 9.3k VOTES Voice acting may be the most important element of a successful animated show, and though the voice acting in superhero car...
All of Batman's Deadliest Villains & Enemies, Listed 920.8k VIEWS List of all Batman villains and enemies found on this Batman villains list. This list contains all super villains Batman has...
Every Batman Villain Is Just A Reflection Of The Caped Crusader's Damaged Mind 125.9k VIEWS There is a popular theory, sometimes called the Batman Villain fan theory or Bruce Wayne crazy theory, which suggests the ca...
#7 of 18 The Best Characters in the Nolan's Dark Knight Series, Ranked 2.6k VOTES Film buffs, we are ranking the greatest characters in Christopher Nolan's The Dark Knight Trilogy. From Batma...
What Your Favorite Batman Villain Says About You 881 VIEWS Batman’s rogues' gallery is unlike any other. His well of crazy, color-coordinating villains runs deep; there are ...

Harvey Dent is also found on...